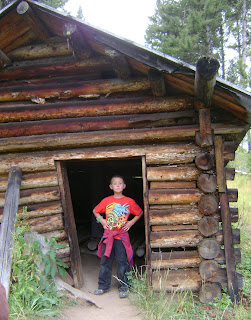 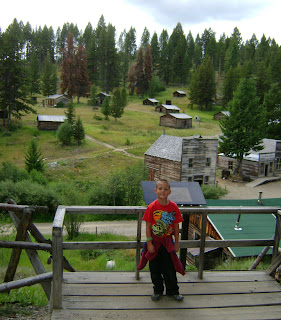 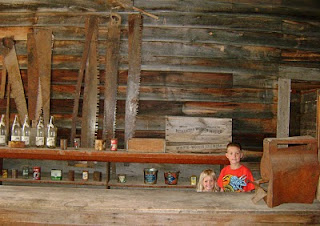 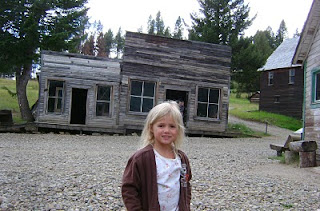 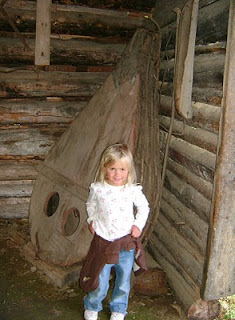 The letter "g" apparently describes our 3 day weekend. Saturday, Brian and I went to the Grizzlies home game. It was fun, exciting and loud -- everything you want. We went a bit early to walk around the tailgating, then went in to the stadium to watch the game. It was quite a romp - 72 to 3 in favor of the Grizzlies. It was beautiful weather until a storm cell came through, delayed the game, and then the blue skies returned. Sunday, we spent time gardening and taking advantage of the nice weather. Monday, the kids and I went to Garnet Ghost Town. It was a surprisingly large ghost town in the Montana mountains, perhaps 20 buildings. A gold mine boomed there for a few years in early 1900's, with just a few stragglers who remained on until the 1960's. The miners houses were fit for hobbits, at best, and it showcased rather spartan living. It was neat to see and the kids got a kick out of it.
Posted by carriesweatland at 4:56 PM

So is it just empty? They haven't done up any of the cabins and tried to rent them out? Looks like a good place to explore. Allen returns from the UK today. His follow up appointment was fine and they are transfering his notes here so he can continue treatment in Holland to save on the travelling home. Got to go back for Mum's 70th but it'll be nice to catch up with everyone. Better get back to the sorting!
Rachael xx

Cute stuff, I love that first pic of Jake. What's that face he's making - can't tell if he's being silly or a difficult.

Can't wait to see you at the end of the month!

Annie - Jake has decided he doesn't like taking pictures, unless he can make faces. So, I guess he is being silly & difficult. What else is new?

Rachael - there's a few ghost towns around the West, and they are completely abandoned. The government took this one over to preserve the history of 'the Old West'. Towns were built practically overnight when gold/silver was found, and mostly they didn't last due to shoddy construction. The towns were usually deserted after the mines dried up, and they succumbed to the elements or vandalism. They are also in the middle of no-where. Garnet is down a steep, dirt road, and Montana is one of the least populated states in America. One old couple held on in the lonely, abandoned town and kept away much of the destruction. The buildings probably couldn't be saved enough to stay in them. They did keep the old couple's house, but some staffers live in it. Well, there is a long, rambly answer, likely telling you more than you wanted to know. Glad to hear Allen is doing well and can move his medical treatments closer to home.