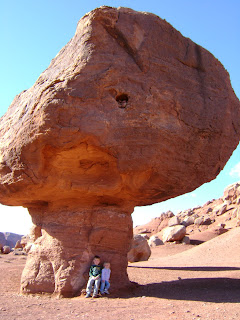 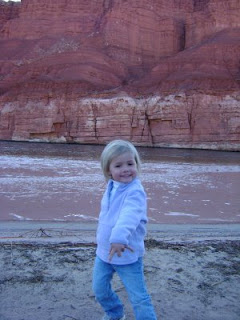 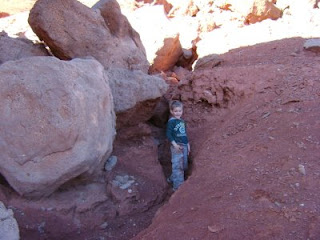 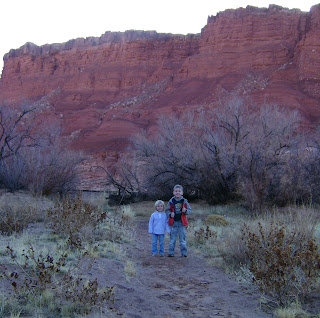 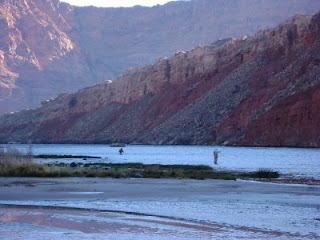 This Sunday took us on an outing to Lee's Ferry. It's a natural crossing of the Colorado River, down stream from Glen Canyon and up stream from the Grand Canyon. Brian fished the running waters, and the three of us had "an adventure". Jacob fell into mud, slid through the dirt and scratched up his stomach. I told him that no adventure is a true adventure unless you get dirty and endure a boo-boo or two. The kids and I played by the river and tried to 'catch' some fish with the kid's fishing rods. Jake is now keen to the fact that the rubber fish on the end of his line is not the real thing. Annie, however, is perfectly fine catching the same purple rubber butterfly that is permanently tied to the end of hers. Next we left the water and the vegetation that surrounded it for the dusty boulders and hills. The kids had the most fun here, as they climbed the washes and the rocks. They proclaimed them all castles and found hide-outs. Not really sure who they were hiding from, though. Then, we headed to see the Lonely Dell Ranch, which was settled in the 1870's and still maintains some old, rustic buildings. There is an orchard there, with plum, peach, apple and pear trees! We'll be returning to harvest some fruit, as you are allowed to do this. Of course, the trees were all barren at this time of year. The winds then picked up, so we ate and left for home. One highlight as we were nearing the exit of the park -- we saw four California condors in the sky. We pulled over and watched three of them fly right over us. They had the largest black and white wings I've ever seen on a bird. I looked them up on line and found that their wing span can be up to 9.5 feet.
Posted by carriesweatland at 1:32 PM 1 comment: 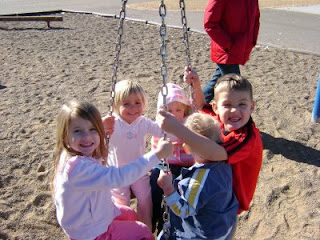 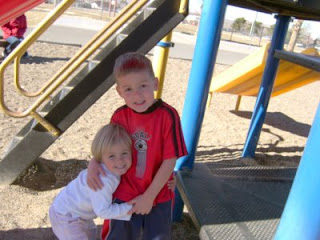 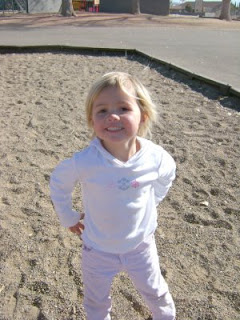 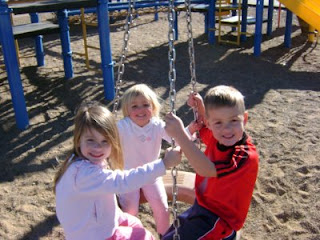 We've settled back into a routine after the holidays - school, work, playing with friends, running errands, and the day-to-day. I snapped some pictures from our playtime at the park today. It's been pretty mild, which has been nice. There really isn't much else to report right now. We hope everyone is doing well.
Posted by carriesweatland at 2:14 PM 18 comments: