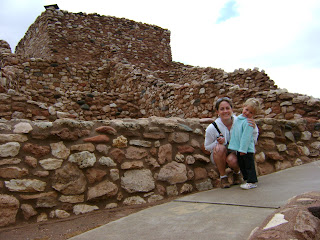 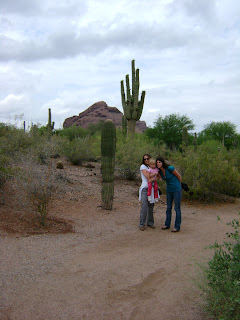 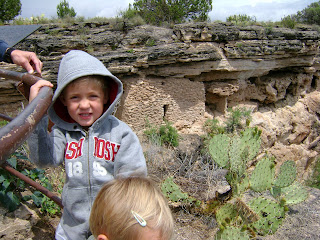 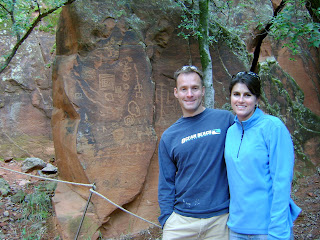 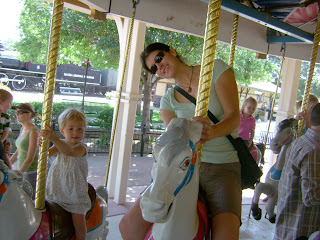 We had a very fun time with the Aunties. We spent time at the desert botanical gardens (which are very impressive), climbed the hole in the rock, and took a day-trip to 3 National Parks plus a petroglyph ceremonial site, with a luncheon stop at the mountain mining town of Jerome. Brian and Sandy did a hike of Squaw peak, while Annie, the kids and I went to a kids park that had a carousel and small train. The weather was cool and perfect, despite the occaisonal rain shower. The kids especially liked the trip, and now they might be able to tell Aunt Annie from Aunt Sandy. Thanks for coming Aunt Sandy, and thanks for having us Aunt Annie!
Posted by carriesweatland at 7:35 AM No comments: 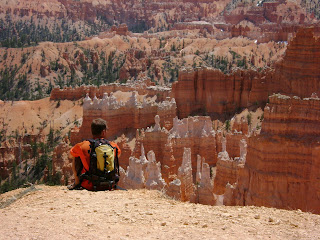 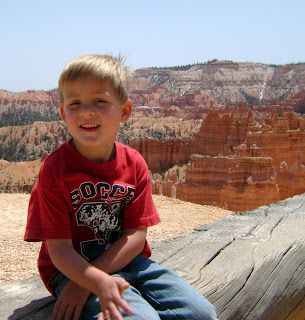 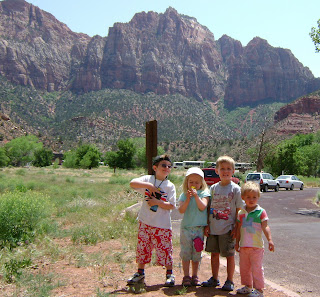 In a whirlwind weekend, we met up with our friends, the Wilsons, for spectacular scenery at two national parks. First was Zion, with dramatic sheer cliffs and rock outcrops. (bottom picture) We camped near the Virgin River, where the kids (Jacobs, Abi, Annie) spent their time with the little irrigation ditch. They were determined to damn the flow of the small trickle, but their efforts were futile. Brian and Allen did a larger hike and saw a rattlesnake in the midst of eating a lizard. Rachael & I did a small hike with the kids to 'weeping rock', which was quite literally that. The navajo sandstone on top of the cliffs absorbs the rain water, then the water filters slowly down until it hits a layer of shale. Then the water travels across the shale layer until it find its way to a cliff and "weeps". Someone tested the water and found that it averages 800 years of age, with the oldest ever test to be 4000 years old. Hard to imagine the world the rain drops first saw, compared with landing on a bunch of tourists' heads after such a momentous journey. Then we went to Bryce Canyon (top two pictures) and stayed in the lodge there. Annie, Jake & I stayed and played on the felled pine trees while the rest of the group did the hike to the bottom of the canyon. The orange-red spires are called Hoodoos, and the Native Americans believed they were people turned into stone by coyotes. We all had a great time and it was fun to see our friends and some more parts of the American Southwest.
Posted by carriesweatland at 4:30 PM 1 comment:

We love you and miss you. May you rest in peace. 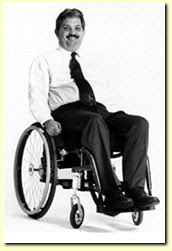 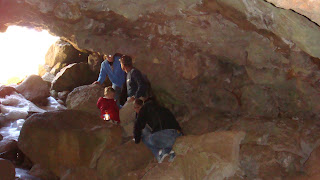 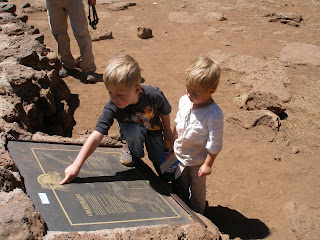 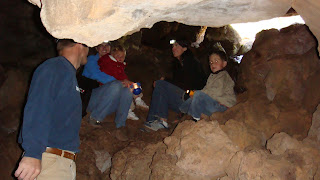 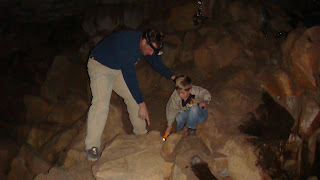 We met up with Aunt Annie & Matthew this past Sunday for a quick trip to Flagstaff. We took a little adventure to a lava tube, just outside of town. It is basically a cave made in the ground some hundreds of millions of years ago by flowing lava. We didn't hike very far into the cave, but enough to get the feel of the cold, damp space. The kids weren't scared at all, and Jacob even wanted to lead the way. At one point, past the light of the entrance, we all turned off the flashlights to see how dark it was. Pretty cool. We spent the rest of the day perusing the shops of Flagstaff and having lunch at an outside restaurant patio.
Posted by carriesweatland at 6:54 AM No comments: